THE QUEEN OF THE AMAZONS (2019)
by Maria Antonia Walpurgis 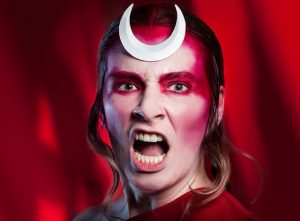 For the first time in Sweden – laser baroque opera by a female composer! We unite sci-fi, mystical rituals and the 1760’s and welcome you to the first performance in Sweden.

In The Queen of the Amazons we are thrown into a war that has been going on for as long as anyone can remember. Men and women are bitter enemies and meet only on the battlefield. The border separating their territories is constantly guarded by the armies as they take turns attacking each other. At the coronation, the ruthless warrior women’s new queen must take a sacred vow – to dedicate her life to fighting their enemy: the men. But she hesitates. Is there a way to coexist?

This magnificent but forgotten baroque opera is a collaboration between the opera company Den Andra Operan, the performing arts company Kamraterna, the Copenhagen based orchestra Damkapellet and the chorus Operadonnorna.

The opera was written in 1760 by Duchess of Bavaria, Maria Antonia Walpurgis Symphorosa (1724-1780), with inspiration drawn from queen Kristina of Sweden. Apart from composing operas, Walpurgis was also a writer, cembalo player and singer. She performed the leading role of queen Talestri at the premiere in Nymphenburg, Munich, in 1760. The opera was performed around Europe in the late 1700’s but then fell into oblivion, as many other works by women throughout history. Until now.

We are bringing Walpurgis’ powerful music back to life and with it illustrate a constantly present and current theme. Welcome to a compelling opera, performed by some of the most exciting opera singers and musicians of our time.

The Queen of the Amazons is a collaboration between Kulturhuset Stadsteatern, Kamraterna and Den Andra Operan.